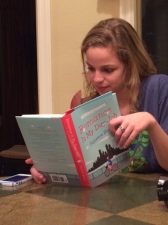 My other adorable niece, Gaby, is in the middle of some important reading. But this is so not her AP History homework. When she’s not reading, Gaby is an accomplished stage actress, pop culture adviser, and with her globe-trotting and smarts, could easily be our next Secretary of State. There is no bias here.

Thanks to her mother, Elise, for the photo! 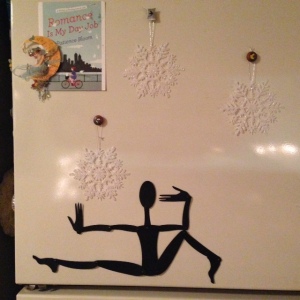 Martin Luther King, Jr. died a few months before I was born, but my parents told me about the impact of the MLK, jr, civil rights, oh, the epic 60s in general, the Vietnam War, riots in Paris, feminism, the rise of Nixon, JFK. There was a benefit to having historian parents! I still get goosebumps whenever I watch the “I have a dream speech.” It’s one of the few times when I wish I’d grown up a little earlier*.

Since it was a holiday, I vowed to take the day off…until I saw a book that need to be edited. Two of them. My husband and I bickered over the fact that I like to print out manuscripts and how much ink/paper that uses up. I compromised by transforming one of the documents into Adobe and edited using my stylus and iPad (two words I would never have used five years ago). When I’m finished, I’ll transfer changes from the Adobe version into the editing software. Is this exciting?

However you spent the day, I hope it was a good one. I ate almost a whole pint of ice cream.

*And to be around for Marilyn Monroe–I am a celebri-holic, after all… 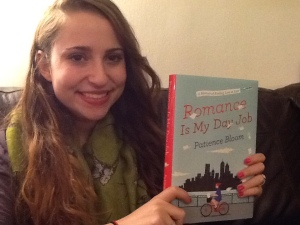 This is my adorable niece Kyra, who goes to school in NYC (majoring in English with a concentration in Theater). She stopped by to say hello. Not only is she lovely and talented (you should hear her sing) but she also has good taste in books!

Today marks three years of wedded bliss, and of course, I woke up with a nasty cold. Maybe it’s subconscious payback for 2010, when Sam had strep on my birthday–not that I keep track of these things. There used to be a tradition in my family where my brother Patrick or I would run a temperature at an important family event, usually on his birthday (Christmas), sometimes at a wedding or Thanksgiving. Like my mother, Patrick would persevere even with a raging fever. Because I’m an alien child, I don’t leave my sick bed until the bug is gone. In 1999, we created new sickness lore since our epic chicken pox of 1973. My brother and I–adults–were both ill enough to leave my mother’s carefully laid-out Christmas table. My mother did a whole lot of eye-rolling. Good thing she doesn’t know that I’m a little miserable on what is, for me, the happiest day of the year.

Needless to say, I married a prince, the kind who brings you soup and ginger ale and sings silly songs to make you laugh. He’s also able to entertain himself while I stay in zombie-land. It’s humbling to have a spouse who is around for those less than glamorous times. I am very lucky. And then I’ll be the one singing silly songs in July, which is when he usually gets The Plague. 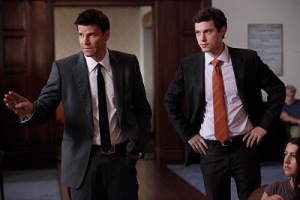 The Huffington Post had this fun post about bromances, utter brain candy for me on this busy day. I love man-love (what’s not to love), and I’ll add a few of my fave bromances from movies and TV:

Tony Curtis and Jack Lemmon in Some Like It Hot: Jack Lemmon is adorable in just about every movie. I highly recommend The Apartment, too, but this one is classic bromance and they even wear dresses together!  Jack and Tony bicker like an old married couple. On Part III of our honeymoon, my husband and I visited Jack’s grave. Sorry, I didn’t mean to be so morbid!

Sweets and Booth in Bones: Not officially a couple but their scenes together are highly bromance-charged. Sweets has an MD, but looks like he’s 12. Booth has the street smarts to counsel Sweets on babe issues. They go together like cookies and almond milk (which is what I drink with sweets).

Michael and Dwight on The Office: Their love is deep. My husband and I watched this sitcom early in our courtship. I identified with Michael (When I try too hard, it usually backfires) and Sam “gets” Dwight in ways I will never fully comprehend.

Al Pacino and Robert de Niro in Heat: While they don’t have a lot of together screen time, the anticipation of their sharing a frame nearly undoes me. These legends live together and–spoiler alert–sometimes they die together…or in the presence of one another. You know what I mean. And there’s Val Kilmer at his most gorgeous.

Brian Kinney and Justin Taylor in Queer as Folk: Okay, this is more-than-friends man-love. Though an unlikely couple with wildly different personalities, they love each other over the course of the five-year series (but break up a few times since you need a little conflict).

Seinfeld and George in Seinfeld: I wouldn’t mind having George as my guardian angel (except he’d fail at this since he’s only out for himself). He’s pleasantly annoying, inquisitive, possibly a cosmic mosquito to everyone else but I find his transparency endearing. Only a less funny/more normal character can deal with him.

When I first discovered

writing, mostly through reading books written by dead, drunk French authors, I thought I would emulate them. Mind you, I was twenty-two. After work, I’d sit at my table with a glass of red wine and write for hours, watching my handwriting get sloppy. Then I took a writing class, read Natalie Goldberg, quit red wine and took to writing at least an hour a day whether it was in my diary or a story.

Over the years, I became less disciplined, writing in mind-numbing spurts–a 500-page book in two months, then nothing for a year. Keeping a blog was easier and my usual regime of writing after work changed to morning scribbling. Now, I try to write before work, a little at night, then double my schedule on the weekends. I could blame my lack of routine on a cluttered desk, but really, there’s no excuse. Getting the butt in the chair is a daily battle.

I’m always curious about other writers’ routines–when they write, how long they write, and what their writing spaces look like. Do you time yourself or just write until you can’t bear it anymore? Some write longhand first, then transfer to the computer. What is your preference? Do you reward yourself for writing a certain number of pages? Lastly, how do you procrastinate?

Patience Bloom
Create a free website or blog at WordPress.com.